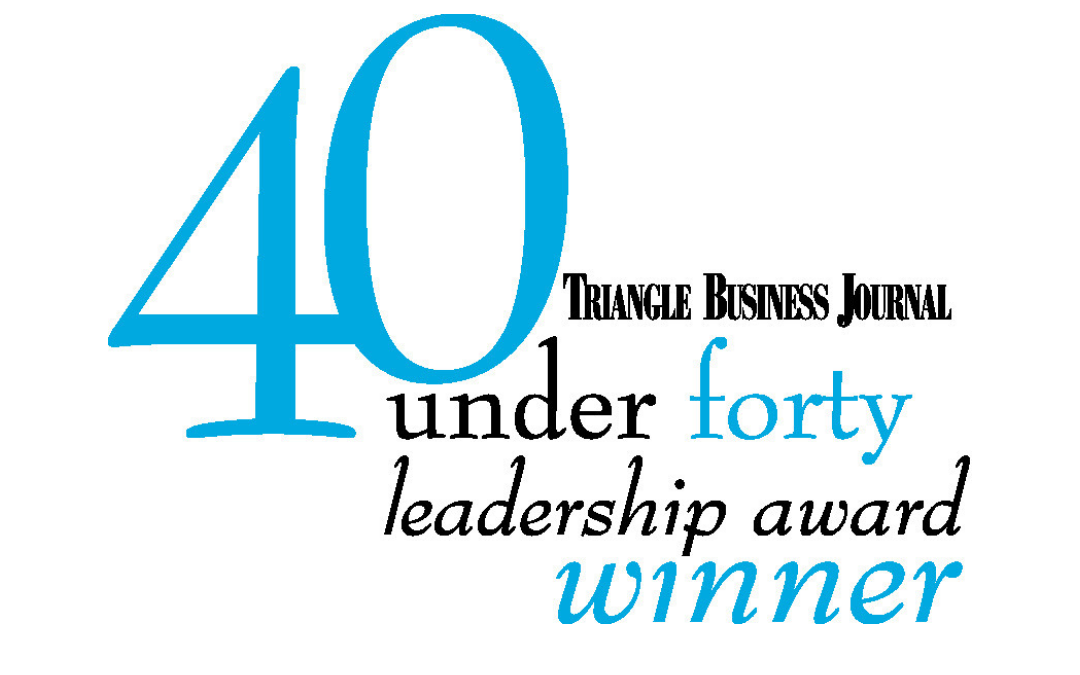 I felt like I had just won an Oscar.

It was a thrill I never expected to receive.

On February 2, 2010, I received an email from Marla Akridge, the President of the Wake Forest Chamber of Commerce.

“We would like to submit your business and you to the Business Triangle Journal for the “40 under 40?”   Could you email a photo, resume, volunteer work,  awards, etc.?  We need it by February 10th.”

I couldn’t believe what I was reading.  I was going to be nominated for the 40 Under 40 award.

I was overwhelmed with emotion as I considered what lay before me.

After I composed myself, I replied to Marla’s email

Marla, I’m deeply honored.  I’ll get this to you by Monday.

To put things in context, as a business owner, there are very few times one gets publically recognized for their leadership abilities.

I knew a few recipients of the 40 Under 40 Leadership award. I had enormous respect for each of them.

One of the people I knew well was Kip Turco. He was my Company Commander of my Army Reserve Unit.  Kip was a graduate of the US Military Academy at Westpoint.  A true man’s man and a mand a respected deeply.

Jodi LaFreniere was the other 40 Under 40 recipient whom I had gotten to know as the accountant for the Wake Forest Area Chamber of Commerce.  While she was President of the Wake Forest Chamber, I witnessed her deal with some difficult challenges with poise and grace.  I truly respected her as a leader.

I remember once meeting with Jodi and seeing her 40 Under 40 Trophy.  I thought to myself I would love to win the 40 Under 40 award one day.

That was the last time I thought about the 40 Under 40 award until February 2, 2010, when Marla Akridge emailed me letting me know she wanted to nominate me for the award.

Every year the Triangle Business Journal has a special edition where they declare the names of Forty People Under the Age of Forty to receive the annual 40 Under.

What was particularly amazing to me was Marla had not had much time to get to know me.  Her first day at the Wake Forest Chamber of Commerce was December 7, 2009.

It was only 57 days from the day I met Marla to the day she nominated for the 40 Under 40 Leadership Award.

I guess I made a good impression on her.  I never asked Marla about why she nominated me, but here are a few things that I did that probably made a difference.

In November, I was informed by the Board of Directors that Marla had been hired to be the next President of the Wake Forest Area Chamber of Commerce.

I suspected I would need to get to know her well as my role as the accountant for the Chamber.

Shortly after I received the news that Marla would be taking over the Chamber, I sent her the following email.

I wanted to see if I could set up an appointment with you when you start at the Wake Forest Chamber of Commerce.  I currently do the accounting for the Wake Forest Chamber.  I also helped Jodi LaFreniere set up the Accounting and Procedures Manual.  Here are a couple of items that I think should be on the agenda for our meeting.

I’m looking forward to meeting you and helping the Chamber in whatever capacity I can.  Thanks.

Marla responded that her start date wasn’t until the first week of December and suggested we met at that point.

Anyone who knows Marla knows that she is a bundle of energy.  I believe she told me once her spirit animal is Tiger from Winnie the Pooh.  She’s absolutely delightful.

During our first meeting, Marla talked about how she was a big fan of Malcolm Gladwell.  I had read Tipping Point and also enjoyed his writing.

On January 11, 1999, he wrote the article Six Degrees of Lois Weisberg. It was a fascinating article about one of the elite personalities in Chicago who was the person who could get anything done.

Knowing that Marla was such a big fan of Malcolm Gladwell, I got a copy of Six Degrees of Lois Weisberg and mailed it to her.  On the first page of the article, I included a Post-It note where I hand wrote the following:

I remember you saying you were a big fan of Malcolm Gladwell.  Here’s an article he wrote that I really enjoyed.

Now I looking back at the experience, I recognize what I did to create a good impression with Marla.

Seeing My Own Potential

A couple of weeks ago, I got a call from an editor at the Triangle Business Journal. He told me that I had been named as one of the 40 under 40 for 2010. I was nominated for the award in February this year.

This was a very important award to me because it represents what I strive to be “A Business Leader in the Community.”

What does it mean to me to be a business leader in the community? It means that I am dedicated to making a difference in my community.

Winning the award has been wonderful. It’s been very emotional to me.

I know a number of people who have won the award in previous years that I truly respect. They represent the best of humanity. They live their lives in a way that makes a difference.

They are the types of people that I admire and want to fashion my life after. I’ve thought about what it means that a selection committee from the Triangle Business Journal this year chose me.

It means that I am a peer to the people that I respect and admire. I can’t begin to describe the feelings I have on an almost daily basis.

I’ve never felt so driven in my life to give everything I have into each day. I’ve never before been so happy with the friendships that I have and the people I get to meet.

I’ve never been prouder of myself and what I am becoming. I’ve always felt like there was something that I was meant to do.

That there were great things within me.

That I would accomplish great things. I am just now starting to see my own potential and what I have to offer.

Today, I attended the 40 Under 40 banquet sponsored by the Triangle Business Journal. It was a wonderful event.

This year I was one of the 40 under 40 award recipients. It was a great honor and very thrilling. I remember growing up that I was always at the end of the line because my last name starts with Y.

As a youngster, it always bothered me a bit. Now I actually enjoy being last in a line because by being last I get to be remembered more.

Char Grunwaldt, the publisher of the Triangle Business Journal, was one of the speakers. In that speech, she started reading a quote from one of the winner’s blog posts.

As I was listening, I realized that she was reading from my post Seeing My Own Potential last week. I didn’t realize when I started to blog last year that people would actually read my writing.

It was quite a compliment to me that my words from my blog would be read in front of the whole audience at the 40 Under 40 banquet.

One thing that I really enjoyed about the event was the presentation ceremony. As each winner went to the stage, their favorite song was played. Two people had the Fight Song for NC State University play.

I was the last recipient, and my song was “Rocket Man” by Elton John.

Why did I choose Rocket Man?

Because of my fascination with the Apollo Program.

America was founded on the principles of New Frontier, New Beginnings, Adventure, and Endless Possibilities.

Now Rocket Man has a new added meaning to me.

I’ll forever associate it with the 40 under 40 now.

Sometimes it is good to take a moment and reflect on the successes we have in life.  It’s too easy to get caught up in the day to day hustle and bustle of life.

I’m glad I took a few moments to relive this part of my life.