Are We All Becoming Mindless Zombies? 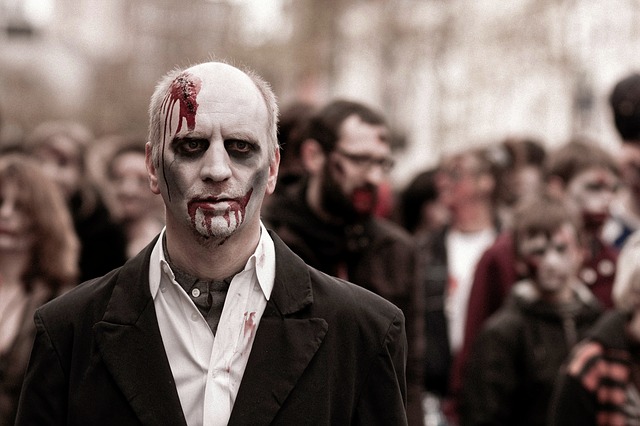 Nine years ago the world was overtaken by zombies.

At least that’s what the TV show The Walking Dead would have us believe.

Could there be anything scarier than a mindless zombie moaning as it staggers towards you?

Yes, there could be something scarier.

Turning around and seeing another zombie coming towards you from the opposite direction.

And then you turn to your left, and you see another zombie.

Now you turn to your right, and you see another zombie.

The zombie apocalypse is alive and at our footsteps.

At least that is what the TV producers at AMC would have you believe.

My cousin Cameron raved about how amazing the TV show was.

However, Cameron was not the first person to extol to me the wonders of the undead.

How did this happen?

Why all of a sudden was all things zombie now a part of the collective zeitgeist?

I tried watching an episode of The Walking Dead.

I’m not sure how many episodes of The Walking Dead I was able to get through.

I do, however, remember the scene that made me quit The Walking Dead.

There is this one scene where a few people are in Atlanta.

Atlanta has been overtaken by zombies.

Everyone that was once a human had been infected by a zombie, and now the only remaining living people were five or six people.

The zombies have a keen sense of smell.

They can smell the living.

As soon as a zombie smell a human life, they all stumble along moaning as they move with a hive mentality to rid the earth of any last shred of human life.

Our human heroes realize that they are in a bad way.  If they try to walk down one street, the zombies will smell them, and every zombie will move to get our human heroes.

Then one of the humans comes up with a plan to get past the zombies.

They devise to smash apart a zombie and then cover themselves with the remains of the zombie.

They will mask their human smell with the stench of zombie flesh.

Part one of the plan works, and every human starts to smear the putrid remains of a zombie all over them.

And that’s when I just about lost my lunch.

The gag reflex went into overdrive.

How in the world did this episode gross me out so much that I was four seconds away from vomiting with disgust over people smearing zombie remains all over themselves?

It was a visceral experience.

I think I almost smelt the undead careening through the TV screen into my nostrils.

What a horrifying experience.

I could not go any further.

I could not watch another minute of The Walking Dead.

I think this one scene from The Walking Dead has emotionally scarred me for life.

I will never be the same.

It’s a memory I wish I could erase from my brain.

What could I possibly do to unsee this horridness?

Which got me wondering even further.

What in the world makes anyone sense that zombie movies or television shows entertaining?

I certainly will never want to view anything related to zombies again in my life.

What got the world so fascinated with zombies?

Did you know that The Centers for Disease Control, produced a comic book called Preparedness 101 Zombie Pandemic?

If you have never read it, you can find the comic book by going to https://www.cdc.gov/cpr/zombies/

Some of our tax dollars were spent to warn the US population of the dangers of zombies taking over the country.

Is there someone at the NSA or FBI or CIA hiding something from the American Public.

I know some people have claimed that the US Government whitewashed the Alien Invasion that occurred in Roswell, New Mexico.

You do realize aliens live amongst us.

Is today’s zombie proliferation in American pop culture our version of the alien invasion?

Some would say yes.  Look no further than Capitol Hill.

The place is full of the undead.

Some would say that, but I would never say that.

However, I do wonder if we have all become the undead zombies.

I will tell you that some days after a long day at work, I feel completely undead.

If I have two days in a row like that, will I be one step closer to frothing at the mouth and groaning as I waddle closer to my next victim?

Maybe I will not literally become a zombie.

I will not start decaying if I spend multiple days staring at a computer monitor.

However, I will begin to die a bit inside if my only interaction with humanity is through social media or email.

I’m not alone in thinking that we are increasingly becoming disconnected from each other.

All the technological advances over the last twenty years have driven a wedge between me and my neighbors.

In one regard we are more connected than ever.

In another regard, all we do is look at lighted tubes.

TV was once referred to as the boob tube.

Now we are always connected to a boob tube on our phone or even our watches.

We’ve lost touch with each other.

We’ve lost touch with connecting at a human level with another human being.

This loss of human connection is a travesty.

Something has got to change, or we should just turn our lives over to the Matrix.

Unlike zombies, the Matrix isn’t real.

But humans are real.

Except they are not.

The very things that make humans human are what we need more of in our lives.

We need to connect more with each other.

There was a time when our ancestors would gather around the campfire and share stories of the day just lived.

In our quest to advance human progress through technology, we have removed what makes life worth living.

We have removed humanity from life.

I predict that those who can bring genuine human connection back into our lives will have the power to make a real difference in human progress.

We need more human connection in our everyday lives.