Daddy, Why did you lie? 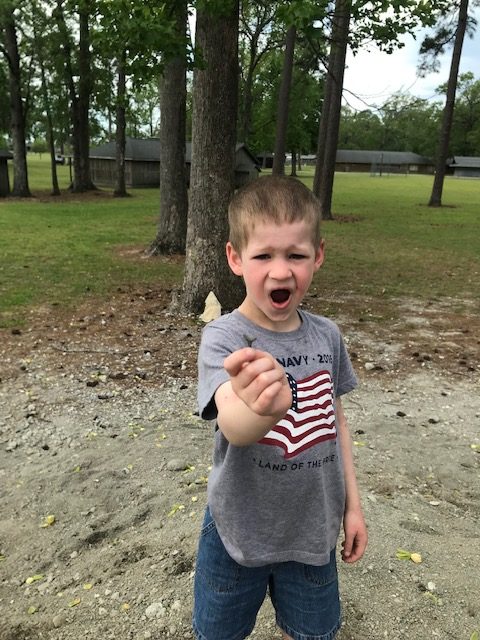 My six-year-old son Levi and I were driving back from a splendid weekend we had at Camp Seagull. He and I had joined the Y Guides Program the previous fall.

The YMCA sponsors the program to foster time between sons and daughters and their fathers. The Y Guides was founded in 1926 by Harold S. Keltner, who was the director of the YMCA in St. Louis.

My son gave himself a new name of Howling Wolf, and he named me Soaring Eagle.

We meet on average once a month to have a tribe meeting with several other dads and their sons.

We have nine dads and sons, and our Tribe is named Mighty Thunder.

In the spring we all travel to the coast of North Carolina to Arapahoe for the annual Camp Seagull Weekend.

Every year there is a different theme of the Camp Seagull Weekend. This year’s theme was a circus theme Under the Big Top.

There are lots of fun activities such as hunting for sharks teeth, obstacle courses, BB guns, and archery.

The big question I had for Levi this year was “Is he going to go down the zip line. The zip line starts with a five-story tower.

After donning a harness, we climbed the five-story tower to get clipped to the cable that runs a couple of hundred feet over a pond.

At the end of the zip line, you wade through the water to finish the adventure.

Levi’s lit up when he saw the zip line.

We put our harnesses on and then proceed to climb the stairs to the top of the tower.

As soon as we got to the top, Levi sheepishly, said, “I want to go down.”

We turned around and went back down the tower.

Then when I met with the other Dad’s and sons, the first question that came out of their mouths was, “Did you ride down the zip line?”

I replied, “We got to the top of the zip line, and I got scared, so I made Levi turn around.”

I hammed it up a bit to make it sound like I was super scared.

Truth be told, I have had a bit of a fear of heights in the past, and I’m not a massive fan of the zip line.

That being said, I think the zip line is a great way to teach children to overcome their fears and enjoy the journey that comes from conquering fears.

We ended our weekend at Camp Seagull and started the drive home.

As we were driving, out of my son’s mouth came the words, “Daddy, why did you lie?”

Talk about a shameful moment.

“What do you mean?” I replied to Levi.

“When you were telling everyone about the zip line, you lied about being scared. I don’t like it when you lie.” my Honest Abe son spoke to me.

I tried to explain that I was joking about the situation, but it didn’t make any sense to him.

I accepted his criticism and said, “I won’t lie anymore, Levi.” He smiled, and we went about our trip back home.

Even though I was joking, I realized he was right.

Out of the mouth of Babes