An Exciting Evening of Entertainment 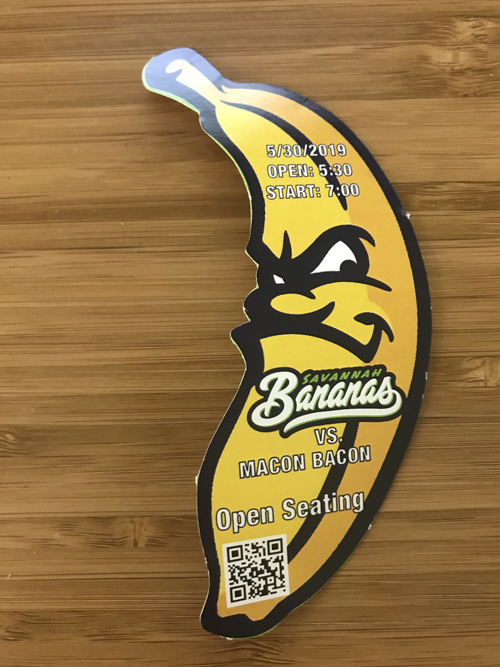 An Exciting Evening of Entertainment

It was by far the most enjoyable baseball game I’ve ever been to.  This week I had the pleasure of attending Opening Night of the Savannah Bananas at the historic 4,000 seat Grayson Stadium in Savannah, Georgia built in 1926.

There was so much going on at the baseball game.  The crowd was excited the whole evening, and we all had loads of fun.

I had the distinct pleasure of getting to meet Jesse Cole, the owner of the Savannah Bananas, is a tremendous ball of energy that instantly lights up with excitement.

The first thing you will notice when you see Jesse is he is wearing a yellow tuxedo and hat.  I found out that he owns seven yellow tuxedos.  He’s been around baseball his whole life.  He was a bat boy for the Red Sox, and at age 20 he pitched a game at Fenway Park.  Jesse loves baseball.

Our behind the scenes tour started with a group meeting where Jesse gave a pep talk to his executive team.  The meeting had more of a pep talk feel than a boring board room meeting.  It definitely set the tone right for an evening of fun.

Tonight, we are going to make an amazing experience for our fans.  We’re going to make mistakes, but that’s OK.  Give it your best, and let’s all work together as a team.  Each member of the executive walked talked to the team about the playbook they had for the evening’s night of entertainment.

Once the group meeting was over, we headed up to the seats in the grandstand to hear Jesse tell an impassioned speech about his experience as a baseball owner.

He began his speech with the mission of the Savannah Bananas.

Jesse talked about the first few months of owning the team.  It was a complete and utter financial disaster.  He had only sold one season ticket.  The company ran out of money.

Desperate times called for desperate measures, and Jesse would not allow success to slip through his fingers.  Jesse and his wife Emily sold their home and moved into an apartment and slept on a twin sized air mattress.

Jesse read a copy of Profit First and realized that by getting creative, he could get a lot done with his baseball team with a limited amount of money.  He began making trades.

Here are some of the words that were particularly memorable for me.

Think about what your customers hate and get rid of it.  We realized was fans hate to pay ticket fees.  So, he got rid of the ticket fees.  They got creative with their tickets and decided to print of banana-shaped tickets.

Jesse looked at all sorts of ways to partner up with other businesses to make trades so that he could keep as much money in the business as possible.

Jesse’s face lit up the most when he told us he never pays for dry cleaning of his yellow tuxedos because of trades he set up.

Then the real magic of Jesse’s story began.  He started talking about all the ways the Savannah Bananas create an amazing fan experience.  Some of the fun things you see at the park are:

A young lady started playing a ukulele and sung the game announcements to a melody of songs.

At 7 pm, I looked around, and every seat of historic Grayson Stadium was full of by a raving Bananas Fan.  The Nana Bananas were sitting to my left.  The Nana Bananas are a group of 15 senior citizen women in a white Savannah Bananas baseball jersey.  On the back of each jersey in navy block letters was the word Nana.  One lady even had Banana earrings. Midway through the game the Banana Nanas took to the field and performed their own dance number.

I had a delightful time.  There was so much energy in the crowd as we all cheered on the Savannah Bananas.  It felt more like a three-ring circus of fun than an old stodgy, boring baseball game.

Then we got to the bottom of the ninth inning.  The game was tied 3-3.  The Macon Bacons third baseman overthrew the ball to the first baseman.  The Bananas runner on third sprinted home to score the winning run.  As he touched home plate, I jumped in the air with both arms extended and shouted for joy to see the Savannah Bananas with the 2019 home opener.

It was an epic night.  It was the best baseball game I’ve ever attended.

It was clear that all the infectious energy Jesse Cole poured into the team and the fans had paid off for the 2019 home opener of the Savannah Bananas.

I was reminded of a few hours earlier when Jesse was talking to me as I got the behind the scenes tour before the baseball game.

We have a playbook for our fan experience.  We’ve mapped out the entire customer journey from the moment a fan buys a ticket to the end of the ball game when the fans walk out to their cars.  We are looking for every opportunity to bring fun into our fan’s night at the ballpark.  We want each fan to go away with a story and say, “You’ll never guess what happened at the ballpark!”

Thank your Jesse Cole for my fantastic fan experience.  You turned an out of town visitor into a Savannah Bananas Fan for life with one magical night on May 30, 2019.  I will remember this and brainstorm ways to wow my customers.  Jesse, you are a bright shining light in this world.