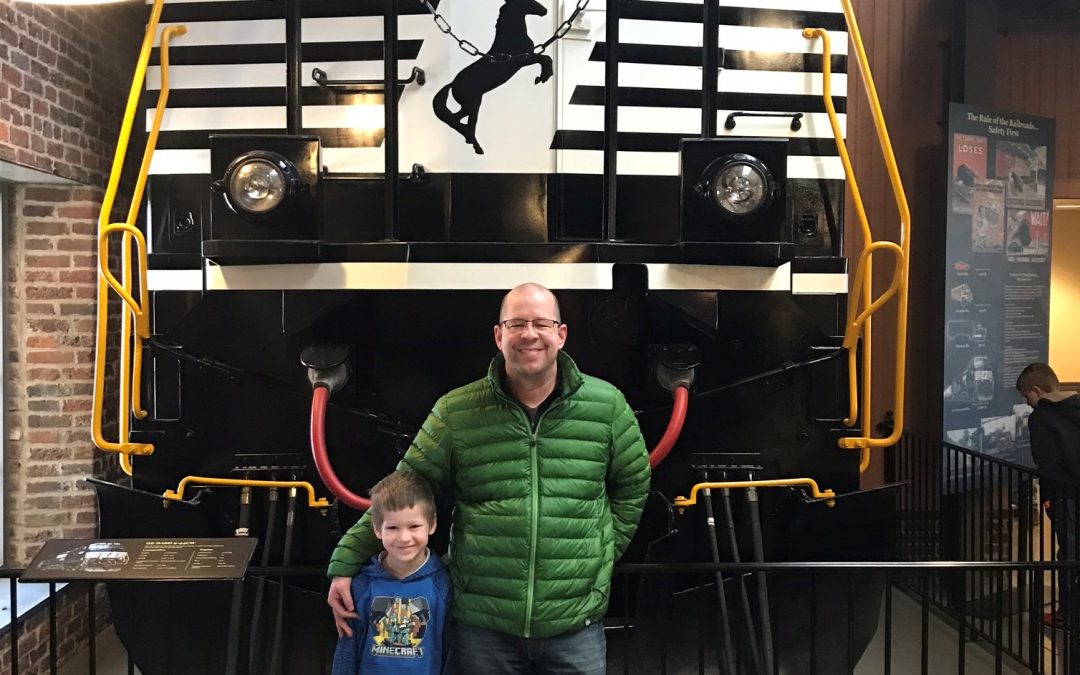 Last Saturday, my son Levi and I joined our Y Guide tribe for a train trip to Zack’s Hot Dogs in Burlington, NC.

Y Guides is a YMCA program in my neck of the woods where my son and I do different activities with other dads and their sons.

We took the train trip to Zack’s Hot Dogs last year and such a good time that we took the trip again this year.

As we were waiting in the Cary Train Station, I suggested that we make the trip again next year.

The train ride was about an hour long.

While we were traveling down the rails, I asked Joe who organized the trip how he got the idea for our train trip to Zack’s Hot Dogs.

Joe, who is a partner at a prominent law firm in my hometown of Raleigh, NC, shared the following story.

Joe was talking with a potential client, that I’ll call Alan, attempting to secure an initial meeting with Alan.

As Joe and Alan were discussing the initial meeting, Alan replied that he’d like just to get a hot dog.

“Ok,” said Joe, and they ended the phone call.

Joe then did some research to find the best hot dog stand in NC.

As Joe was doing this research, he learned about Zack’s Hot Dogs in Burlington, NC.

There were lots of raving fans who proclaimed that Zack’s Hot Dogs has the best hot dogs.

Then Joe learned that about the Zack’s Hot Dog train ride.

The Amtrak train station in Burlington is a few short blocks from Zack’s Hot Dogs.

The train schedule works out just right so that you have just enough time to ride the train to Burlington, grab a few hot dogs, and then catch the return train back to Raleigh.

Once Joe put all the pieces together, he called Alan and told him about the Zack’s Hot Dog Train Trip.

Then Joe and Alan had time to spend talking for an hour on the train as they traveled to Burlington.

They had their scrumptious hot dogs and then spent another hour on the train returning to Raleigh.

Joe then talked about how good the trip was because it gave Joe and Alan time to get to know each other.

As the train ride back to Raleigh was coming to its end, Alan said to Joe, “You’re hired.  If you’re going to spend this much time and attention to get me a hot dog, then I want you to be my attorney.”

A big smile rose across my face as Joe ended the story.

I said to Joe, “Of course you got hired.  Why wouldn’t you have gotten hired?”

Joe took something ordinary and made it extraordinary.

I can’t think of anything more ordinary than a hot dog.

I’m mean, it’s an amalgam of meat scraps shoved together in a tube.

Sure, there are 500 different ways you dress up a hot dog with toppings such as coleslaw, relish, mustard, sauerkraut, onions, cheese, and ketchup.

Joe made that hot dog special by finding the best hot dog stand in North Carolina and providing Alan with a unique experience that Alan would remember the rest of his life.

All the work did on the front end of the Zack’s Train Tide showed the care and attention Joe gave to the trip.

When I was a teenager, I played on a basketball team, and I remember getting tired during one of the drills.

My coach shouted out to me, “Damon, what you do in practice is what you’ll do in the game.”

I remember thinking to myself back then, “No, when I’m in the game when it matters, I’ll hustle a lot more.”

Now that I have a few more decades of life experience, I recognize the wisdom of my coach’s words.”

How you do one thing shows how you do everything.

Here are a few more details about the care and attention Joe took for our Zack’s train ride last Saturday.

Earlier last week, Joe called Zack’s to make sure that we’d be able to get our hot dogs.

When the guy at Zack’s answered the phone, he responded to Joe, “We’ll be open, and we’ll have hot dogs.”

Joe said to me, “I want to make sure that I’ve handled all the details so that we have a good time.  It only took a few minutes to call, but what if Zack’s was closed that day for some reason?”

“It would have been a big disappointment for everyone to take a one hour train ride and not get our hot dogs.”

Joe told me about all the other things he did to make sure our trip to Zack’s Hot Dogs was a success.

Joe then arrived early at the train station to make sure our train ticket was right.

Joe then double-checked the train schedule to make sure the train coming back to Raleigh was on time.

As Joe shared with me all the details, I gained a sense of appreciation at Joe’s character.

When things run smoothly, it is because people have worked out all the details behind the scenes.

While we were on the train, Joe shared another story with me.

Joe told me about a conversation he had with a prominent business person that I’ll call Mike.

Mike shared with Joe the secret of his success in one short sentence.

“Show up on time, do what you say you’re going to do, and bill appropriately.  That has been the secret of my success.”