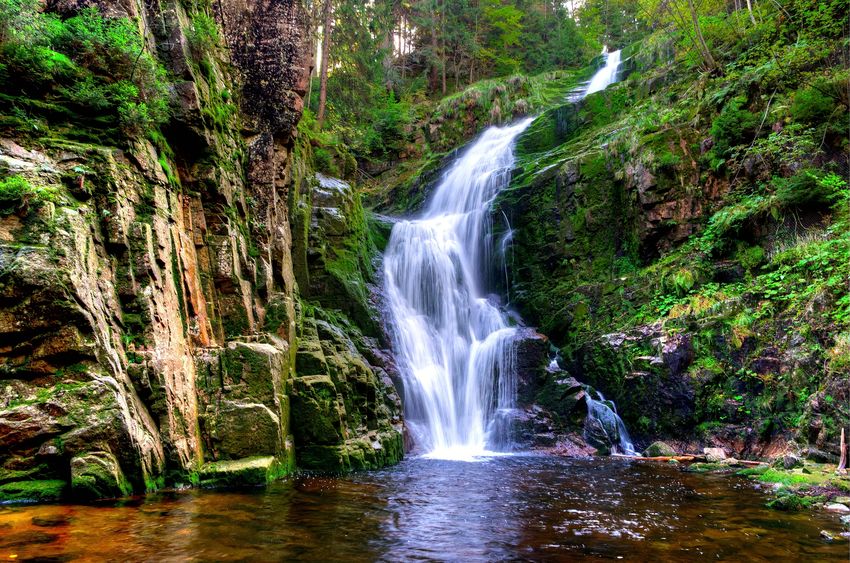 It was 22 degrees Fahrenheit outside, and I came to the end of the path.  In front of me was a 30-foot waterfall.  I’d been on the trail for about a half an hour.

I had a simple choice to make.  Do I continue forward, or do I turn around and go home?

On my left shoulder, my adventurous devil was urging me to continue ahead with my adventure

On my right shoulder was the cautious angel reminding me of my four children.  He extolled me to turn back and return home safely.

I relented to the devil.  I had driven four hours for this two-day adventure, and I wasn’t going to go home yelping in defeat like a Jack Russel Terrier with his tail between his legs.

I surveyed the waterfall, cautiously analyzing any possible way to navigate my way to the bottom of the waterfall.  About fifty feet away, there was a fastened rope that I could use to shimmy my way down the rock face.

Then next thing I noticed my boots simply would not grip the granite facade I was standing on.

I lowered my self to my bum in an effort to gingerly skootch my way to the rope.  If I could just make it to the rope, I would be able to safely descend.

That’s when it happened!!!

I started to slide slowly, then a little bit quicker, and finally I was neck deep in the middle of the waterfall.  I was swallowed up by water, and the river threw me down the waterfall like a rag doll.

Shivers ran through my bones as I was soaked from head to toe.

Everything went in slow motion as I rode the rapids to the bottom of the waterfall.

Just like that, I was at the bottom.  Relieved.  No open wounds and no broken bones.  I had survived the treacherous descent down the waterfall.

My first instinct was to find the rope and go back up the waterfall, but I didn’t have the energy.  I would just need to set up my camp for the night and get warmed up in my sleeping bag.

I turned my mind back to my Boy Scout days and got a simple fire started.  I spent the next ninety minutes foraging for firewood so that I could warm my bones.

That’s when I remembered the last words my wife uttered as I drove off before this trip.

“Don’t fall down a waterfall!”

On that trip I had multiple points I could have made different decisions.  I could have turned around many times.  But I persisted and continued down a path that drenched me with water.

Over the last month, I’ve been diligently writing new blog posts.  I initially began with the intent to write about ways to better manage the money side of a business.  As I’ve reviewed what I’ve written the last month, I’m surprised at what most of my writing has actually been about.

A lot of my writing has been focused on the everyday decisions a business owner makes.

As I began to ponder that further, I asked myself, “Why am not writing about money?”

That’s when I realized something very important.

Money is the gauge that measures how effectively we are at running a business.

Money is the messenger.

Most people complain about their lack of money.

A few months ago, I had a conversation with George, a person I had just met.  I had just finished a workshop with a very successful entrepreneur and I decided to invest in his coaching program.

George commented to me, “If I had the money to invest in that program, I would be very successful.”

George’s comment shocked me.  I then thought to myself, “You have got it all wrong George.  Your thinking is backwards.  You want the result, but you don’t want to perform the action to get the result.”

Most mediocre people live with flawed thinking.  I’ve had many relatives whose favorite activity was the weekly trip to the gas station so they could get their lotto tickets.  I’m going to win Mega Millions this week.

Something for nothing is what they desire.  They are just not willing to do the work that it takes to gain mastery over money.

Money problems are not money problems.  Until someone dives deeper into the cause, they will continue to struggle with money.

It’s a sad state of affairs.

75% of Americans live paycheck to paycheck. Think about that for a moment.

If one loses their job, they will be up a creek without an oar. They will be in a financial disaster.

This leads me to a bold statement.

Most people are bad with money.

Sadly, I see the same numbers play out for a lot of business owners. I am astounded by how little cash businesses have in their bank accounts.

I’ve done a lot of tax returns for businesses over the ten plus years I’ve been in business and know what the numbers are.

Most businesses are 1-3 bad months of sales away from going out of business.

Why are so many businesses in dire consequences? Because people run businesses. People don’t automatically become good with money when they run a business. The same thoughts, beliefs, habits, and actions people have in their personal lives carry over to their business lives.

Here is another bold statement.

Most business owners are bad with money.

The demands of money are much greater on a business owner.  They have people depending on them to make payroll.  I’ve known people that have mortgaged their houses to make sure the business had enough money to make payroll.

I’ve known people that pulled money out of their retirement accounts to make payroll.  The turnip cannot bleed anymore.  They continually rob Peter to pay Paul until Peter runs away.

It doesn’t have to be this way.  There is a better way to run a business.

What’s the solution? Change your relationship with money. Change the thoughts, beliefs, habit, and actions you have with your money.