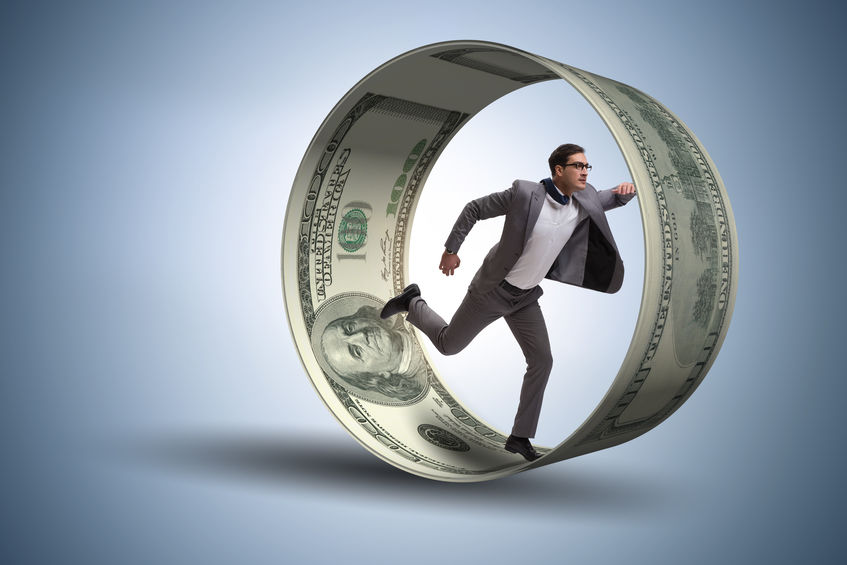 Here are the income spectrums that I’m going to discuss in this article.

In the business world, you need to be objective about where you fit into the income spectrums.  I know plenty of business owners that have businesses with revenue greater than $1,500,000 per year.  Yet, their personal bank accounts do not translate into that person earning $1,500,000.  A lot of times I see these business owners barely earning a six-figure annual income.  Realistically, that person is a Middle Class income earner even though their business has revenue greater than seven figures.

A shocking statistic in America is that 75% of Americans live paycheck to paycheck.  They spend everything they make each month.  Even more surprising than that, many spend more than they earn with each paycheck.  This is equivalent to a rowboat with a 36-inch holes drilled into the bottom of the hull.  The rowboat is on a collision course with Davey Jone’s Locker.  It’s just a matter of time before the rowboat is resting at the bottom of the sea.

If they lose their job or source of income, they will experience a financial disaster pretty quickly.  In my estimation, this financial disaster usually occurs within three months if the person is not able to acquire a replacement of their lost income source.

In the business world, I estimate that more than 75% of business owners live paycheck to paycheck.  There are more financial demands on business owners.  Business owners have to pay their employees.  They often have business debt.  They have to market their businesses.  A lot of times everyone gets paid first, and the business owner receives the last scraps of earnings.  This is a frustrating dilemma, and most people are unaware of their

In the Realtor world, I see a lot of seasonality in most Realtor businesses.  Most of the time I see annual feast and famine occurring in Realtor businesses.  April through September are the feast months.  Those are the months when everyone is making hay.  Lots of homes go on the market, and most realtors can sell a lot of homes.

The famine months run from October to March with January through March being the worst months for closings.

I’m going to address bankruptcy now as this is a true indication that someone has lost all control of their money with no end in sight of things getting better.  The top causes of bankruptcy in America are:

One of the first things to acknowledge is that you are the only one responsible for your current status of your business.  It doesn’t matter if some tragic event occurred that stressed your finances.  You can have good excuses for your poverty.  In the end, a good excuse is still an excuse.

Until you take 100% ownership for your current money state, you will blame someone or something for your dilemma.

By taking 100% ownership of your money status, you can start to examine the root causes of what got you where you are. This is super valuable information.  Once you know the cause of your effects, you can take action.  You can choose different actions that will lead to different results.

Steps to Permanently Change Your Finances.

I’m not interested in providing you with a finger bandage for the gaping wound that is bleeding profusely.  That will be of no service to you.  I’m going to give you the two most important lessons I ever learned about money.  These lessons came to me by reading the best personal finance book I’ve ever read.  George S Clason wrote The Richest Man in Babylon over 90 years ago.  It is a book that is designed to teach you ownership over your gold.

Here are the two most important things to know about your money:

Yes, it really is that simple.  Truths are truths and these are the two most basic fundamental truths about your money.

I’ll repeat them again for emphasis

These two simple truths work.  I know they work.  I am a product of putting these truths into place in my life.

As a teenager, my parents divorced, and we were thrust into poverty.  We lived off of church welfare to make ends meet.  It was humiliating and demoralizing.  I went on to get a college degree in accounting.  I then obtained a Masters in Business Administration.  Shortly after I finished graduate school the economy was teetering on the brink of sinking into a Depression.  I had no job.  I had to go on unemployment to protect my young family from the wolf lurking at my door waiting to devour us.

I then looked at myself and realized I wasn’t living by the two fundamental principles of money.  I wasn’t paying myself first, and I was spending less than I earned.

I recognized my sin, and I changed the direction I was going in.  I stopped digging the hole of debt.

I began to pay myself first.  I stopped spending more than I earned.  It was a life-changing decision.

As a result of this decision, I showed money that I respected it.  My respect began to make my bank account fatter.  Then I had $1,000 in my bank account, and my money anxiety disappeared.

I didn’t have to worry about money because I knew I would not run out of money.  I knew that I would always pay myself first and I would spend less than I earned.  It really is that simple.

Simple but not necessarily easy.