The Steps We Take Today Determine What Our Tomorrow Will Be 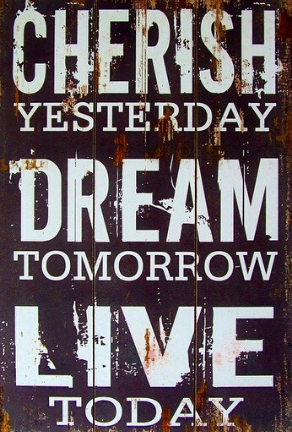 When I was a young teenager, my parents divorced, and I spent the remainder of my youth raised by a single mother.

It was a challenging time as anyone who was raised by a single parent can relate.

Despite the challenges my mother faced as she navigated her new responsibilities as a sole parent, she maintained a hopeful disposition.

Perhaps the greatest gift I received from my mother outside of my life was the optimism of what tomorrow would bring.

Up until the divorce, my life seemed fairly normal.

Our family was a church-going family.

I was involved in scouting programs.

I enjoyed learning and excelled in school.

However, everything got disrupted when the apple cart of my life was turned upside down when my parents split up.

Adolescence was a confusing time for me.

The teenage angst that one feels became confounded by the absence of a male role model in my life.

I had to figure it out on my own.

There were many times where I felt like a lost puppy.

Fortunately for me, I became friends with a few people during high school that buoyed me up while I figured out what direction I would take my life.

My friend Nate lived in a neighborhood close to mine.

We spent lots of time together during my last two times in high school.

Both of our mothers recognized that when we were in each other’s company, we were just having fun and there was no need to worry about us getting into trouble.

As I got to know Nate’s family, I got to see a model for what a happy family looked like.

It gave me hope that my future could be different than my present.

Nate’s father was a successful high-ranking officer in the Army.

While I never saw the Army side of Nate’s father, I was able to see what he was like around his family.

He cared deeply for his family and taught them the way of the good life.

On a few occasions, I had the opportunity to have private conversations with Nate’s father.

During one of these talks, Nate’s father talked about how he progressed through his military career.

As a young soldier, he decided to attend jump school and become a U.S. Army Paratrooper.

After jump school, he was stationed at Fort Bragg, Home of the Airborne.

While at Fort Bragg, he became a company commander.

He then went on to other duties.

Later in his career, he became a battalion commander back at Fort Bragg.

As Nate’s father finished up this story, he told me that much of the success of his military career hinged on the decision he made to attend jump school at the beginning of his Army career.

Going to jump school moved him to each of his leadership positions.

Being Airborne qualified were critical requirements for most of his important career jobs.

He concluded his story by telling me that the early decisions we make in life have a big impact on the direction we take in life.

I finished high school and went off to Idaho for my first year of college.

After my first year of college, I returned back to my home in North Carolina for the summer.

It was a strange adjustment to come back home.

For the previous year, I had tasted the freedom that comes with spreading my wings in college.

However, now I was back in my childhood home.

Worse yet, I had nothing to do with my time.

With the idle time on my hands, I was becoming restless and somewhat sad.

I wasn’t in school anymore, and for that brief summer I had little direction for my life.

While I recognized the summer months would soon be over, and I would be back to my workaday routine, the idle summer days weren’t good for me.

For some reason, Nate’s father was giving me a ride one day that summer, and we started to chat.

At the end of our talk, he told me that I should get a job and I would feel better.

Soon after our talk, I got my old job back, and I started to feel better about myself.

It helped me realize that my life is happier when I work.

I’ve done many different jobs over my life, and the low points in my life were usually periods where I wasn’t working.

There is a sense of fulfillment that comes from honest work.

It’s been almost twenty years since I last spoke with Nate’s father.

If memory serves me correctly, he retired from the Army as a Colonel with close to 30 years of service in the Army.

I’m now a father of four with two daughters that are at the beginning of their teenage years.

My hope is the life my wife and I have built for them will provide them with the stability and security I was missing when I was their age.

Most parents want their children to have a better life than they had growing up.

We try to teach them lessons and instill values in them that will lead them on the path of the good life.

Many times, it’s easy to get caught up in the hustle and bustle of life and the continual march towards what tomorrow will bring.

While my mother taught me to look forward to the optimism of what tomorrow will bring, my life has taught me to recognize that today is the only time that matters.

Tomorrow is a promise of a better life.

Yet, tomorrow, in reality, doesn’t exist.

We only live in today.

Today is what matters most when we look at our lives.

Today is the only time that we have control over.

Today is the space that we live each day of our lives.

Today is the space where we make choices that determine our destiny.