The Wright Brothers Didn’t Have A Pilot’s License 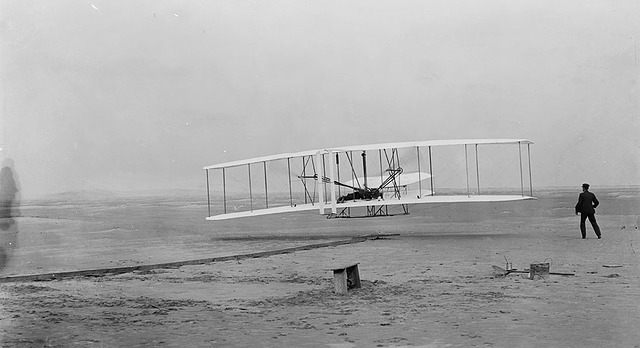 It didn’t stop them from figuring out how to build a powered airplane.

Prior to their bicycle enterprise, the two brothers built a printing press and published a weekly newspaper that later became a daily newspaper.

Sixty-six years after their historic flight in Kitty Hawk, North Carolina, Neil Armstrong, and Buzz Aldrin walked on the moon.

The pace of progress with powered flight is astounding.

Humanity is always seeking to do the next great thing.

Before 1954, nobody had ever run a mile in less than four minutes.

A year before Roger Banister broke the four-minute mile, Edmund Hillary and Tenzing Norgay summited Mount Everest the tallest mountain in the world.

I believe the capacity for human potential is boundless.

When I was twenty, I had a unique experience that taught me a powerful lesson.

Here is the lesson I learned:

Life is short.  I have to make the most of the time I have.

A few months ago I wrote an article entitled I’m Losing My Marbles where I share a method I’ve come up to track the remaining weeks I have on this blue marble.

I’m in my mid-forties, and I’m in good health.

If the genes of my ancestors continue with me, I expect to live at least another forty years.

However, I’m reminded frequently of the lesson I learned twenty-five years ago.

Life is short.  I have to make the most of the time I have.

I’ve been able to have some fantastic experiences in my life so far.

My father was in the Army, and I lived in West Berlin back when the Berlin Wall was a stark symbol of communism.

When I was twenty-one, I started my first business and spent two years failing miserably.  I never made any money with that business.

I probably lost more than $20,000 with that business venture which was a lot of money back then.

I was raised by a single mother who worked herself into the ground, trying to make ends meet for her four children.

Those were lean times that made me determined to provide a better life for the family I knew I wanted.

After my stint in the Army, I got an undergraduate and graduate degree from NC State University (Go Wolfpack!).

I’ve always wanted to prove to myself I was successful.

However, for many years, I languished with a poor self-image of myself.

I continuously beat myself up about the failures I had and the stupid mistakes I made.

If I could go back twenty years and tell myself one thing, I would tell myself to give myself grace for my shortcomings.

When I finished my graduate degree, I had tens of thousands of dollars of student loan debt, and I had no job.

I had no prospects.

To make ends meet, I went on unemployment and received around $470 a week.

Which was just enough money to keep the lights on, feed my family, and keep the mortgage bill paid.

For the next two years, I struggled as I tried to build my accounting business.

I remember so many days where I put on the image of a duck on a pond.

Calm, cool, and collected above the surface of the water. But legs kicking like hell, to stay afloat and get some traction.

The hard work and persistence paid off.

I’ve built a life for my wife and four children that is wildly more than I dreamed was possible.

I’ve been gainfully employed for the better part of twenty-three years.

Over those two decades of work, I only spent six years employed by someone else.

The majority of my career I’ve owned my own business.

The worst days in my business were better than my best days working for someone else.

The Wright Brothers didn’t know how to fly an airplane when they launched their biplane on December 17, 1903.

Roger Banister didn’t know how to break the four-minute mile at the beginning of 1954.

NASA didn’t know how to fly to the moon at the beginning of the 1960s.

Charles Lindbergh didn’t know how to fly across the Atlantic Ocean in 1927 when he left the runway from New York.

Benjamin Franklin didn’t know how to capture electricity when he took a kite out into a thunderstorm.

Everything new we do in life is something we have never done before.

One of my greatest strengths is my ability to learn.  I love learning.

Sometimes I get so caught up learning something new by traditional methods of reading and researching that I forget the most powerful way to learn.

I get so caught up in wanting to get everything figured out first before I get started that I delay getting started.

When I get caught up in the analysis paralysis, I have to consciously remind myself that if I really want to learn and make progress, then I need to act on the knowledge I have.

I have to tell myself I’ll learn a lot more by doing than I’ll ever learn by reading.

I had a friend who told me once.

You can’t learn to swim by reading a book.