I Vanquished the Devil from My Business 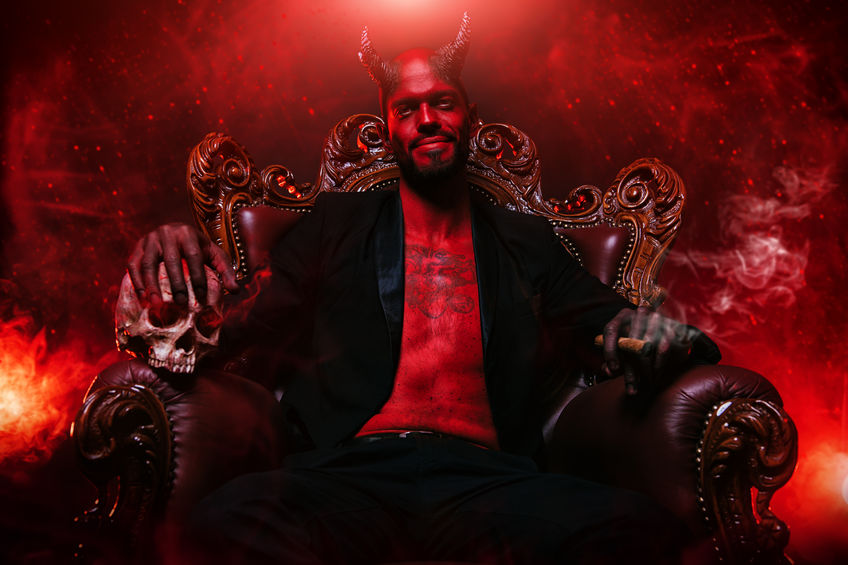 Whether you realize it or not most businesses are fending off the Devil.

The Devil slowly walks around the doors of your business.  Then when he sees a crack in the wall, he crouches down and prepares for the kill.

He sits there half-cocked waiting for the right moment to trounce upon you and your dreams.

If he can’t find any cracks in the walls, he’ll turn to your plumbing.

With a drill in hand, he’ll pierce the pipes.  The drill bit will grind away at the pipe until a leak springs.  Before you know it, leaky pipes have overcome your business, and you’ll not know where all the money is going.

At least that’s what I assume about you.  I assume that about you because that is how I started my business life.

I made many mistakes.

However, I did one thing right.

If you read closely, you’ll learn the one secret I did to keep the devil at bay. Ultimately, by using this secret, I vanquished the devil from my business.

My Nana grew up in Kansas and lived through the Great Depression.  I remember talking with Nana, may her name be remembered for blessing, about those times.  Nana is the most amazing person I know.

She told me of the lean times.  It was a struggle.  Her mother passed when she was two years old.  I can’t imagine the challenge of living a life where you never get to know your mother’s love.

As much as I’ve learned about the Great Depression, I didn’t live through it.  It is impossible for me to know the despair of someone who slugged through those desperate years.

In May of 2008, I graduated with a Masters In Business Administration from NC State University.

Before I enrolled in graduate school, I had a desire to learn more about business.  I wanted to be a Business Tycoon.  I had a couple of jobs and had become a bit disenfranchised with the accounting profession.

When I enrolled in graduate school, I thought I had bought my ticket to become a Business Tycoon.

What I didn’t realize at the time was it is impossible to become a Business Tycoon working in a job for someone else.

I had the faulty thinking that with an MBA, I would be a hot commodity that would garner me a healthy six-figure income.  I believed that with my an MBA degree, I would be guaranteeing a secure future.

What I didn’t realize is it was impossible to become a Business Tycoon as an indentured servant in someone else’s business.

Pomp and circumstance was blaring through the speakers of the auditorium as I proceeded to cross the stage to receive the prize for my three years of academic work to receive my diploma.

When I exited stage left, I headed to meet my family and live out a moment I had been dreaming about for years.

I held my 3-year-old Norah in one arm and my two-year-old Claire in the other arm.  Tears were sliding down my cheeks as I stood there in my cap and gown.

I was fulfilling the dream I set in my mind three years earlier, when I started the MBA program.  Every time things got tough, I focused on the day I would be standing with my a daughter in each arm as my wife captured the moment on the film of a camera.

I wanted that picture. It was my prize

It was a proud moment for me.  Even today, that moment fills my heart with pride and gratitude.

The joy was short lived.  I was unemployed.  A few months later, I nearly collapsed as I saw Lehman Brothers declare bankruptcy.

I couldn’t believe it.

How in the world was I going to get a job!

I started collecting unemployment as I looked for jobs.

I attended networking events where throngs of other people had just been laid off from their jobs.

The Great Recession was in full swing, just as I was finishing my academic career.

How could how I have been so lucky to meet with stars aligned to graduate from college in the worst economy of my generation?

Much like the Great Depression my grandmother endured, I had to rise above the Great Recession.

It’s been more than eleven years since the Great Recession ended.  Unless you lived through the terror of those times, you can never really appreciate the horror that was in the world’s collective consciousness.

We were on the brink of financial disaster.  The world, as we knew it was desperately close to ending.

After wallowing in self-pity, I came to the point of no return.

The bridges of employment were burned for me.  Even if I wanted to get a job, nobody would hire me.

I had to start a business to make put bread on my young families table.

My self-confidence was so damaged at that time. I put on a costume to mask my lack of confidence.

Every day I wore a white shirt and tie to raise my self-image.

The problem was I only owned two pairs of slacks and three white shirts.

I went to work five days a week.

So I rotated my clothing daily.

Five months into this routine of putting on my professional costume, the pull tab of the zipper of one of my slacks broke in half.

Unless you’ve been there, you can’t recognize how hard it is to close a zipper on your fly when it only has half of a pull tab.

I couldn’t afford to get a new pair of slacks so every other day I spent what felt like two minutes closing my zipper every time I visited the bathroom.

In May of 2009, I finally had some extra cash from my business.  I went to the store and bought four pairs of slacks and two white shirts.  Now I could wear a fresh white shirt and a fresh pair of slacks each day of the week.

My back was against the wall, and I knew that if I didn’t change things immediately, I would have to declare bankruptcy.  The bank would foreclose on my home.

Where would we live?

And that’s when I made the best financial decision of my life.

I headed the words of The Richest Man In Babylon.

Ten percent of every dollar I earn is mine to keep.

I set up a separate bank account.  Every time a customer paid me, I moved ten percent of that income to my new bank account.

To reinforce the pay myself first philosophy, I nicknamed this new bank account the Damon bank account.

Every time I felt like my business needed to purchase something, I looked into my business operating account to see if I had enough money.

When I realized there wasn’t enough money to make that purchase, I came to a simple decision.

My business couldn’t afford to make that purchase.  I would have to figure out a different solution.

Occasionally the devil of useless spending would reach out towards the Damon bank account.

“That is my money.  I earned that money.  You don’t have the right to spend the money I’m using to feed my wife and children.”

I had earned it.  And I would rather die first than be robbed by my business.

The Devil be damned if it tries to rob me of my paycheck.

Trust me when I say this know. If you think you cannot afford to pay yourself, you might as well close your business now.

Within five years, your business will fail.  I guarantee it.  So go ahead and do yourself a favor.

You will save yourself from a broken soul, depleted savings, and bankruptcy.

You are better off working for the woman or man.

If you won’t commit to paying yourself first, you don’t deserve to be in business.

Most businesses fail within five years of the day the business owner hangs up his shingle.

What makes you think that you are so special that you can beat those statistics?

If you don’t pay yourself first, you will fail.

I’ve been in business for more than eleven years now.

I’ve succeeded where so many failed.

Trust me when I tell you this.

You have got to pay yourself first.

You don’t make it to eleven years of business success without doing a few things right.

The single best business decision I made was to pay myself first.

If I had not committed to paying myself first, my business would have failed.